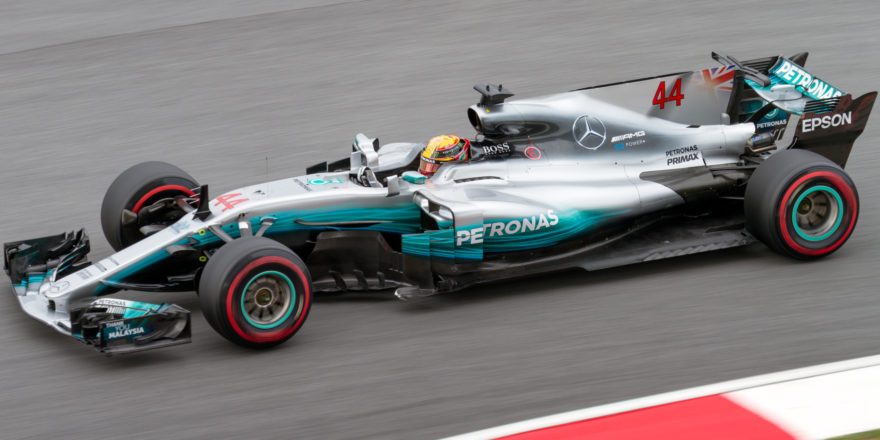 Formula 1 is the highest class of single-seater auto racing sanctioned by the Féderation Internationale de l’Automobile (FIA) and owned by the Formula One Group. Since its inaugural season in 1950, the FIA Formula One World Championship has remained one of the premier forms of automobile racing. The Formula One season consists of a series of races, known as Grands Prix. These races are held both on public roads as well as one purpose-built circuit in various countries around the world. There are two annual World Championships in a Formula One season, one for the drivers and the other for constructors.

The Formula One cars are the fastest regulated road-course cars globally due to the speed it achieves through large amounts of aerodynamic downforce. These cars are mid-engined, hybrid, open cockpit, open wheel single-seaters. Their chassis is made up of carbon-fiber components which makes them light but at the same time strong and rigid. An F1 car including the driver’s weight but excluding fuel weighs 740kg which is the minimum weight set by regulations. F1 cars are to be constructed by the racing teams while designs and manufacturing can be outsourced. The cars are powered by turbocharged 1.6 liter V6 hybrid engines. F1 cars are capable of going from 0 to 160km/h (100mph) and back to 0 in five seconds.

About The 2018 FIA Formula One World Championship

During the season, there were a few team changes. McLaren terminated their engine partnership with Honda stating Honda’s repeated failure to supply a reliable, competitive power unit as the reason why the partnership was ended. They then entered a three-year deal with Renault who had parted ways with Toro Rosso. Sauber, on the other hand, renewed their partnership with Ferrari and upgraded to more current specification power units.

Torro Ross signed on 2016 GP2 Series champion Pierre Gasly and two-time World Endurance Champion Brendon Hartley as their full-time drivers for the 2018 Formula One Season. Charles Leclerc, the reigning Formula 2 Champion was hired by Sauber to replace Pascal Wehrlein. Williams also hired Sargey Sirotkin as a replacement for Felipe Massa who had retired at the end of the Formula One 2017 Championship.

The 2018 Formula One Calendar and Races

There were 21 Grands Prix races in the 20198 Formula One World Championship calendar. The race began at the Australian Grand Prix held on the Melbourne Grand Prix Circuit, Melbourne on the 25th of March, 2018. The final race, the Abu Dhabi Grand Prix was held on 25th November 2018 at the Yas Marina Circuit, Abu Dhabi.

For the first time since 2018, the French Grand Prix returned to the Formula One Calendar and was held on the 24th of June 2018 at the Circuit de Nevers Magny-Cous.  Another returnee was the German Grand Prix which returned after its one-year absence and was held in the Hockenheimring. On the other hand, the Malaysian Grand Prix was discontinued causing the Russian Grand Prix to be moved from April to September filling its vacancy.

For the World Constructors’ Championship, Mercedes emerged the winner, coming both first and second with a total of 655 points. With 571 points, Ferrari followed holding the third position.